Okay, so obviously, from my Moda Bake Shop ventures, you know that I have been dabbling in designing.  So I thought today I would share how that came to be and  then tomorrow I would share a few little designing tidbits that I have picked up and find very helpful.

I have always loved "playing" with patterns.  After about a year of quilting I really began to understand the math of seam allowances much better. (mostly learned from making errors :).  So then I started to have more freedom in my creations.  I would see a pattern or tutorial and think that would be perfect if only . . . . and then I realized, I could play with it to make that "if only" into that would be perfect!!  The great thing about quilting is that there are so many ways to make a pattern work for you!  Okay, so now it sounds like I am just babbling so let me share my first "playing" around quilt story.

5 years ago I decided I wanted to make an "I Spy Quilt".  I wanted it to be big enough for the kids to lay it across the entire floor and run around finding squares and I also wanted it to have color groupings.  So I started looking for a pattern and came up with nothing.  So I then stated to just look for something with "big squares" where I could put the "I Spy" blocks and some sort of border.  I found a pattern that is no longer is on-line but it looked a lot like this.  (Ya, it was a Christmas one) 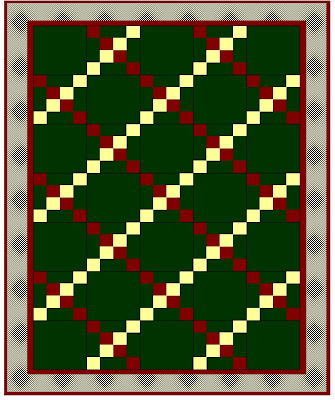 I thought, perfect, I can work with this.  So I changed the big blocks into a set of 4 I spy color blocks, Added more blocks and changed the size of the current blocks to make it the size I wanted, and played with the colors until I got what I was looking for.  (I happened to be an accountant before I became a mom so when I say "play" with sizes, it really is like playing, I find the math in designing to be so much fun :)   In the end I had the design for my perfect "I Spy" quilt. 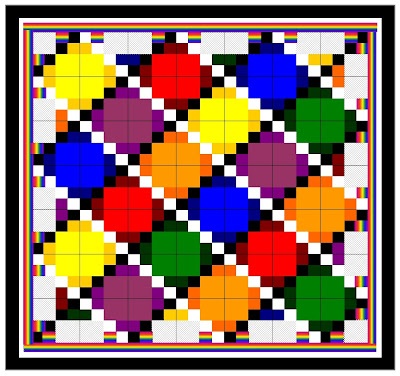 It took me a year or so to collect all the fabric (It is really hard to find fun prints in orange that have things to "Spy" on them that aren't always Halloween themed) and then a little longer than that to make, but I was, and still am, so happy with the result.  The kids never get tired of this "I Spy" game. 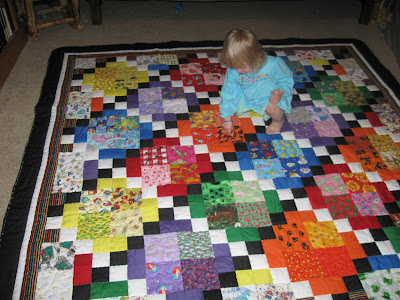 So that was the first time I strayed from the pattern.  I found myself doing this more and more.  I would not have enough of a particular fabric so I would change the design to fit how much I had, or I just really liked a part of the design but not another, so I would change it again.  Until one day, in the not so distant past, it hit me that I was changing more than I was keeping and I thought to myself, "I wonder if I can do this from scratch??"

So I gave it a go.  I started with a simple Table Topper that I made for my mom for Christmas, (Which I never got a picture of, Mom, can you take a picture of that this year and send it to me :)  Then there was a baby quilt after that, and then another, and then I thought, I love the  Moda Bake Shop I wonder if I could do that.  So I made my first Moda Bake Shop Pattern and Tutorial.  (Followed by hopefully many to come :) 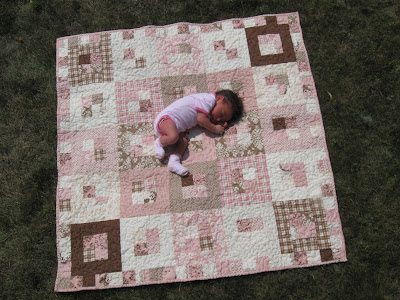 And that brings us to today.

Check back tomorrow, I am going to tell you some of my little tidbits that I have learned over the last bit that help me with my designing.

(P.S.  Just a little disclaimer - I find designing a wonderful and fun part of quilting but that is not to say I design everything I make.  I still find great joy in making up other patterns from other amazing designers :)