Well I won the battle and finished the quilt.  I think the problem was being caused by a poorly wound bobbin.  As soon as I changed it out things started going much smoother.  So now I am finished with my Brown Bag Quilt, which subsequently needs a name . . . Any ideas, I am drawing a blank.

Just as a review, the Brown Bag Quilt challenge was created at Stash Manicure.  Each participant was paired up with a partner and sent them 2 yards of fabric that they no longer felt they would use.  I received 4 1/2 yard cuts (the green print on the back, the medallion print, the burgundy corner print, and the white with polka-dot print.)  The challenge was then to design a quilt using at least 90% of the material received and adding to it material that you already had in your stash.  You were not allowed to buy anything for this project.  It was a super fun challenge, especially designing with such specific requirements.

So here is my result for the Brown Bag Quilt Challenge. 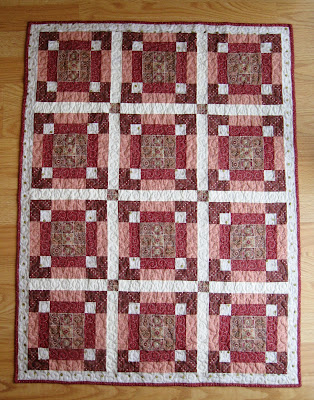 I tried some new quilting.  On the sashing and first block border I did swirls.   I saw this swirl pattern over at Natalia's blog on her I'm Blushing quilt and have loved it ever since.  I kept wanting to try it but it takes a little getting used to and I was worried about having to sew over a line already sewn.  In the end, I figured this was a Brown Bag Contest aka Ugly Quilt Contest so if I messed it up it would be alright :)  And I have to say, by the end of the quilt, I had it pretty much down. (Which I hope I can say after at least 200 of them :) 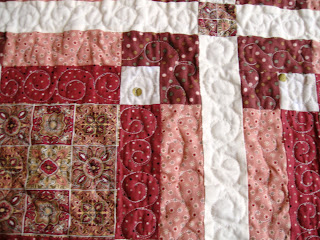 I also did a little curly vine-ish motif in the center block and in the second border.  I thought it went well with the swirls but added some variety.  It was super fun, I think I will be doing it again soon :)  Don't you just love that medallion fabric!! 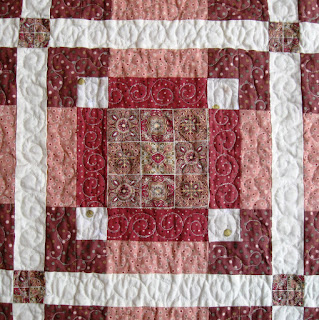 And here is another shot of the back in all of its super snuggly "I have just been washed and dried" glory.  I am so happy with how this turned out.  I can't wait for another challenge like this to come up again :) 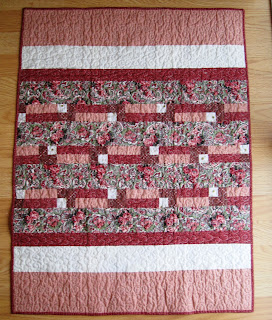 I am linking up to

Posted by Melissa Corry at 9:24 AM