My sweet little nephew arrived a little early last week making his debut into the world on Cinco De Mayo!!!  I have to admit, I have been pretty busy with some secret sewing (market) that this little arrival sort of sneaked up on me.  Nothing like a little afternoon patchwork playtime to solve that ;) 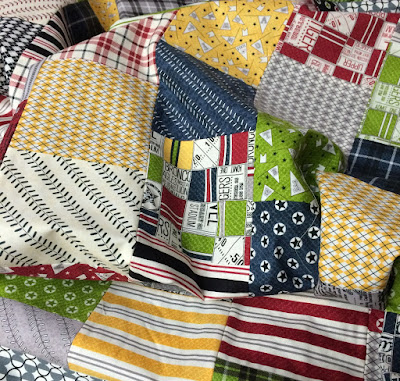 Sometimes I forget how enjoyable it is to just sew some simple patchwork.  It really is just so therapeutic to stitch and not really have to think so much about it :)  And it is so fast and so very fun, it really is like playtime!!!  I made This All Star Baby Quilt  for this little arrivals brother 2 years ago, and I wanted this new little brother's to be similar but not the exact same.   So I used an Varsity Layer Cake by Sweetwater for Moda cut into charms for the patchwork, and then decided to just add another row of patchwork and a border instead of the applique strip. 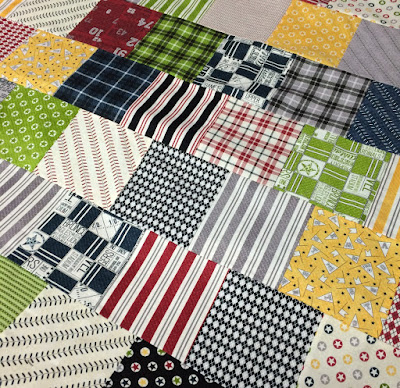 Now just to get it all quilted up and ready to give to mom!!!  And since I was at it, and had lots of charms from the Layer Cake, I made a second quilt top as well.  Now I have a back-up when another little one sneaks up on me ;)

I will share both finishes just as soon as I can get them on the long-arm.  I just have to get one of those aforementioned secret sewing projects off first ;)  Gotta love Market time!!

And now I am just curious, When was the last time you did some simple patchwork??  Do you find it therapeutic and/or fun as well??

Posted by Melissa Corry at 8:20 AM