The kids were out of school on Monday, and after a crazy weekend runaround, we were ecstatic to realize we had absolutely nothing planned for Monday, insert huge sigh of relief :)  And you can imagine my excitement when my daughter asked if she could work on her quilt since we had no plans.   Absolutely!!!!  We made a Pajama day of it, and sewed to our hearts content ;) 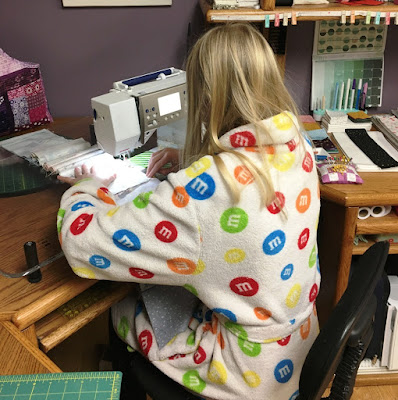 Jessica learned a lot and got a whole lot of practice pinning and pressing to get nice seams.  It was so fun to see her grow more confident with both as the day moved on!!!   By the end of our sewing session, she only had a few seams left :)   She decided she wanted a break so she moved on to picking out her border and binding fabric.  She found fabrics she likes, but not she can't decide which to use for which???  Mint border and Purple binding or Purple border and Mint Binding.  Decisions, Decisions ;) 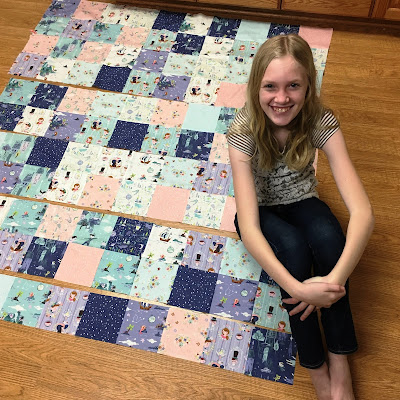 It was so much fun to sew with Jessi!!!  And a bonus is that as she gets more confident she is also getting quite independent, which means I could work on some projects as well, right by her side ;)    Which meant Tuffet Time!!!   (see my previous posts here and here)    I managed to get it covered and the button added to the top :)   Isn't it just so cute!!!   All I have to do now is paint the legs and cover the bottom. 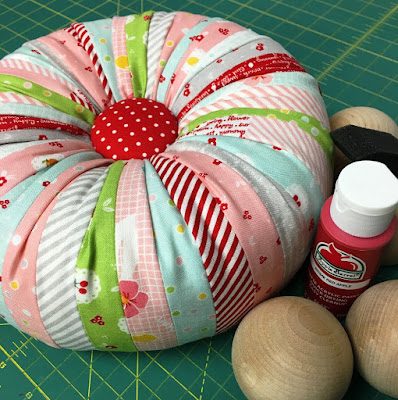 And speaking of the bottom, I wish I could have gotten a picture of us trying to get that button added through these little holes in the bottom but  there wasn't a spare hand for picture taking ;) .  It was a little tricky, and for sure a two man job, but after a few tries, we figured it out ;)  We learned it was best to get two huge upholstery needles and while Jessi pushed down on the foam that was sitting on the counter top with half of it hanging over the edge, I threaded a needle up through each bottom hole at the same time. Then while Jessi continued to hold down the foam, I threaded the strings that we had attached to the button beforehand, and then pushed them both back down through the same holes.  The key was to keep the tuffet flat enough so that the upholstery needles never left the top side of the wood base of the hole in the wood. (otherwise the needle gets lost in the foam ;)     Hopefully that makes sense if you are planning on working on your own tuffet :)
And one last helpful hint, I wish I would have back stitched at the beginning and ending of my piecing.  When I went to pull it over the Tuffet, the seams started to pop a little.  I was super careful, and then stapled it down like crazy so I didn't have to worry about it coming apart, but I think a little back stitching would have made it a little more stable ;)    Things to remember for my next Tuffet Kit!! 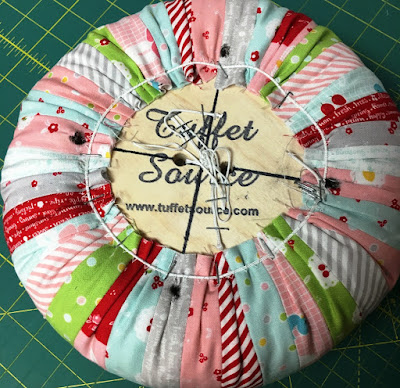 Once I had my Tuffet covered, I didn't want to stop the PJ Sew Fest to run to the store for paint, so I moved on to picking out some fabric for more projects ;)   Always fun right!!!!   The Clementine Quilt Along  hosted by Fat Quarter Shop just released the Fabric Requirements on Monday.  They have Quilt Kits if you want your fabrics to be just like the originals, but I decided to use my stash and in the end, I choose a bundle of Farmers Daughter by Lella Boutique for Moda ;)   I sorted my Fat Quarters into 6 stacks of 4, with each stack having a black, pink, tan, and yellow print.  So now I can just grab a stack each month and I am ready to make the blocks ;)  The first blocks are coming out later this month and I am so excited to start sewing them!!! 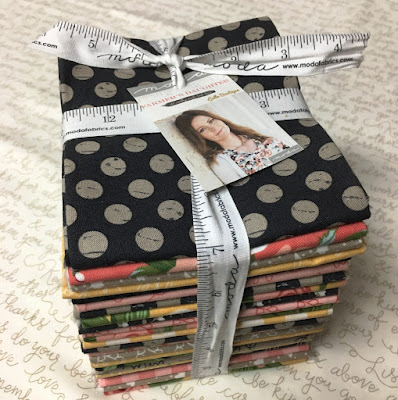 And finally, I decided, at totally the last minute, to add another new project ;)  I am teaching my Pave the Way design at the Cedar Quilt Retreat next week.  I have been working on the pattern (which I will release soon)  to add size options and thought it would be fun to make another sample in a new size for class (ya, like in a week, we will see if I get it done or not ;)    I decided on the lap size which needs 9 Fat Quarters, and I instantly thought of my Tula Pink Spirit Animals bundle that I got in my Sew Sampler box a few months ago!!!  It had 8 Fat Quarters so I grabbed another Tula FQ I had in my stash, which of course, still matches great, love that about Tula!!! 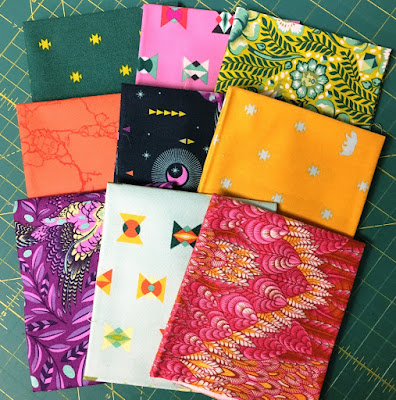 I pressed all my Fat Quarters and cut them up, and then got to the yardage and was stumped.  I can't decide. . .  do I do a dark grey background, (which is very similar to my original Pave the Way)  or do I step totally outside my comfort zone, and try a black background (which I have never tried before)  ???     What do you think . . .Grey or Black???? 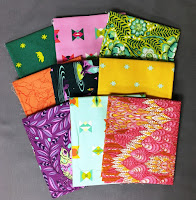 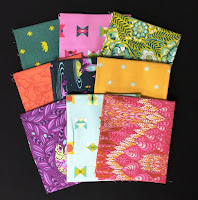 And that was our Holiday Sewing and it was of so much fun!!!  How about you???  Did you get some extra sewing in on this Long Weekend???  What are you working on????

Posted by Melissa Corry at 9:53 AM